We’re filling an ocean with data, and so far we haven’t drowned

I recently read Nathaniel Philbrick’s In the Heart of the Sea: The Tragedy of the Whaleship Essex, and being and old Navy guy, I was reminded of Coleridge’s The Rime of the Ancient Mariner:

Water, water, everywhere,
Nor any drop to drink.

Data can be like that too. We can be drowning in an ocean of data without ever finding a drop of real information.  Some of you may recall one of my blogs last month, “In the Computer’s Cheap Glow,” which reflected on iPass SmartConnect™ and the hierarchy that starts with raw data and ends with knowledge – knowledge that hopefully precipitates action and maybe increases revenue, or even generates new revenue streams.

So a few weeks have passed – as have oceans of new iPass SmartConnect data – and we’re getting a better idea of the power of the information we are collecting. As with any new technology’s introduction, there’s always the fear, “Is this stuff actually gonna work?” At last week’s Smart Mobility Summit in San Jose, I gave a sneak peak of some of the data we’ve been collecting and how we are starting to use this data, from helping improve the Wi-Fi Quality of Service (QoS) experience to helping customers and partners (current and prospective) efficiently spend their capital.  So to answer the question above, “So far, so good. It’s working.”

But before I get too far ahead of the story, let me take a step back and briefly describe some of the data we are collecting.  One of the key features of iPass SmartConnect is the ability to globally “discover, catalog, and curate” Wi-Fi hotspots. Let’s break this down: discover, self-explanatory.  Any device with an iPass app will detect hot spots, wherever they are, whether inside or outside of the iPass network.  Catalog: we are collecting information about these hot spots: their geo location (no one knows with any precision where about 90% of the world’s hot spots are actually located), their signal strength, and more, as you will see below.  Curate: if a hotspot meets our quality criteria and is “available,” free and unencumbered by a password or advertisement, this hot spot can be automatically added—or curated —into our global footprint. As more and more of our customers get the iPass app, the larger our network grows.  Yes, in fact, we are “the Borg.” So here’s an early view of what this looks like: 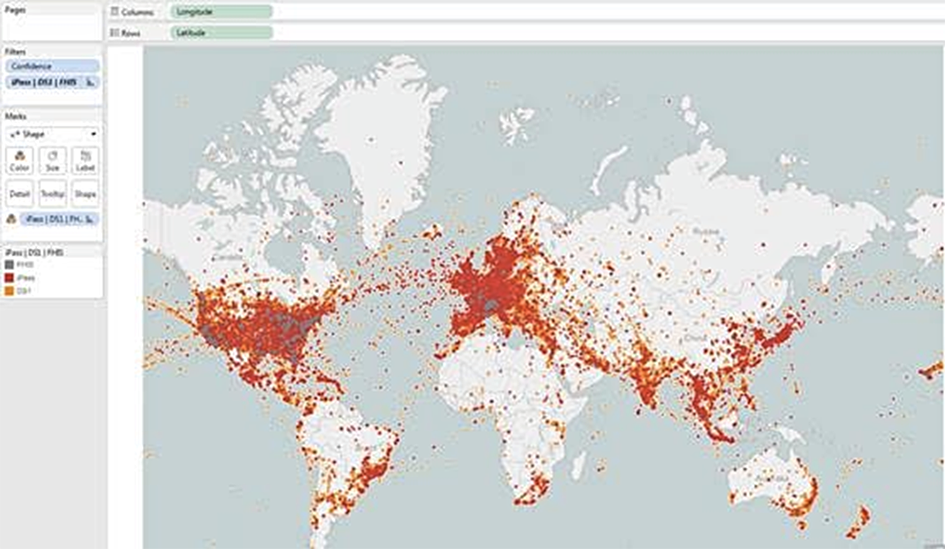 The red dots represent Wi-Fi hotspots – about 40M so far – and growing.  And you may ask, “How can there be hotspots in the ocean?” Well, it’s not the Ancient Mariner, but is, of course, in-flight Wi-Fi: Gogo, Panasonic, Viasat, and others, all in airplanes cruising around the world.  Now, this data isn’t pure yet – we’ve got some filtering to do, including taking out devices that may have an SSID (like printers), and smartphones with personal hotspots, etc. Regardless, we’re getting a pretty good picture for how the global Wi-Fi map is shaping up, all in just a few weeks with a few thousand devices.

And this data has already started helping our customers and helping grow our business.  As an example, at the conference I mentioned, I offered this use case: one of our partners asked if we could expand our Wi-Fi footprint in Singapore.  So we drilled down in the map above, and produced a hot spot map of Singapore, shown here. 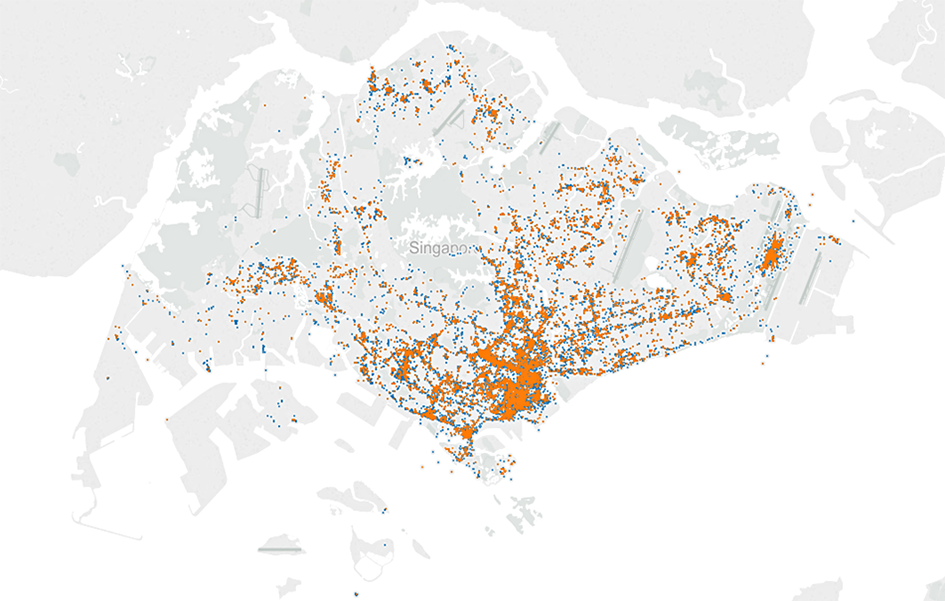 The orange dots are hotspots currently in our network, the blue are not.  We were delighted to see that our data proved that we have almost the exact number of Wi-Fi hot spots that we thought we had in Singapore, based on our network supplier partnerships in this country.  And, of course, iPass SmartConnect also discovered thousands of hotspots that are not part of our network, at least not yet. But going back to the notion of curating hot spots, we see that we can potentially more than triple the size of our footprint in Singapore simply by curating those hotspots that are free, available, and reliable (based on our standards).  Also, we are able to identify, in rank order, the commercial Wi-Fi networks that are not currently part of iPass. Once correlated with traffic patterns we are collecting, this data will help us create a prioritized listing of networks for our supplier team to contact in order to develop new commercial relationships. The result: further expanding our network—with intelligence.

But supplying hotspot locations and delivering network growth are not the only benefits our new data is providing.  The following graphic plots success rates by location: green = success, red = connection failure.  This kind of information is invaluable in assessing reliability and improving QoS. As we identify hotspots with chronically high failure rates, for example, we can “blacklist” them. That is, we remove them from the network and route traffic to better-performing access points.  There is much more we can glean from the signal strength and connection data, but we’ll be spending more time in the future discussing the details as we progress down these exciting new paths.

So up to this point, we’ve been discussing data at the global and country level.  But here is something really cool: 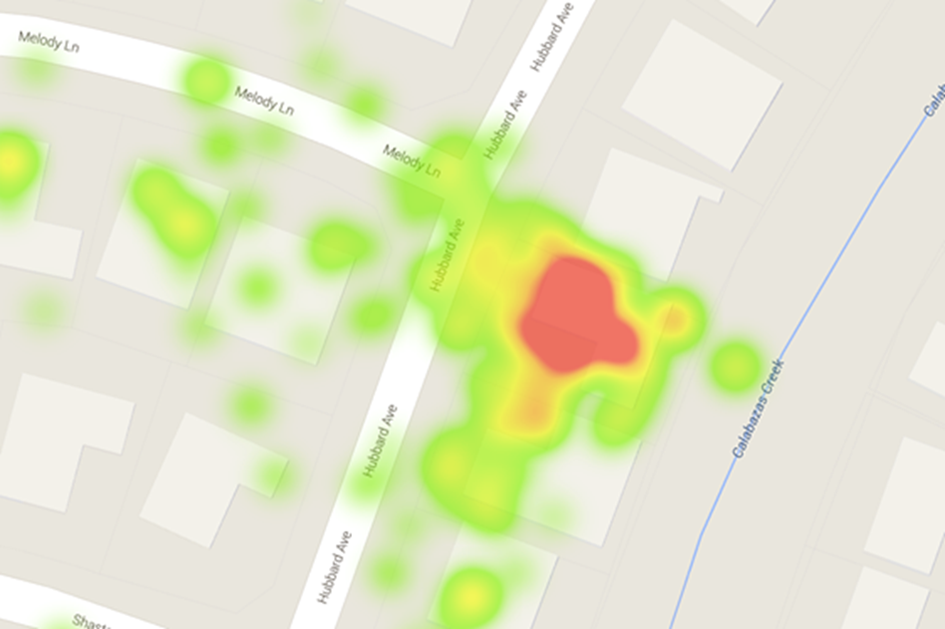 This is the same data that we see in the global map, but magnified to show signal strength with granularity at the city block level.

Or a room within a building level…

Imagine the possibilities.  And we will – but that is for another blog.

Until then, I’ll turn it back to the venerable Mr. Coleridge to summarize these new seas we are about to sail:

The fair breeze blew, the white foam flew,
The furrow followed free;
We were the first that ever burst
Into that silent sea.

Liked this one? Check out another of our great related articles.Google to Bring Wi-Fi to Connectivity-Starved Cuba

From connection management to location-based marketing solutions, we are ready to tell you more. Fill out the form below to learn about intelligent connectivity and what it can do for your business. One of our representatives will reach out to you shortly.